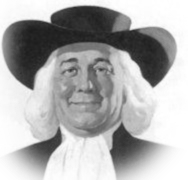 Sometimes, I don’t know what George is thinking.

Last night, in our Aberrant game, he introduced “The Quaker” as a villian. The Quaker, of course, has seismic powers.

I nearly had to leave the room after being overcome with stupid.

Stupid isn’t necessarily a problem, but the campaign has been fairly serious and realistic (given that it is, you know, a supers game). It was an inexcusable break in tone that pretty much ruined the night for me.

Sometimes, George is a great GM. When he’s low on ideas, though, he either devolves into the dumbness or we end up having a session where we listen to him monologue – his NPCs like to talk. Neither of these are good.

I’ve occasionally just had my PC walk out on a NPC who was spewing verbiage, but what do you do when your GM declares that the guy who probably killed two of your friends dresses up like William Penn?

The campaign is probably going to come to a stopping point in 2-4 sessions, so this isn’t something I will need to deal with much longer. I just have little tolerance for playing games I don’t enjoy (what’s the point?), and I can see this going in that direction…

Not that we know what we’ll move on to next. George really wants me to pick the Exalted game I was running back up, but I am fairly certain that I don’t want to do that. I have issues with Exalted in the first place, and – even though I had some great individual sessions – I found running it for that group to be an extremely frustrating experience.