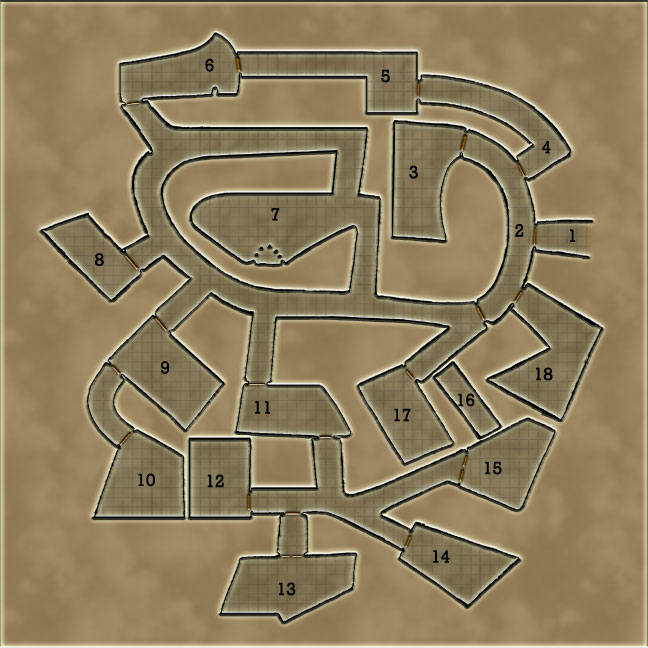 Trap of the Vermin King

This dungeon is intentionally left system-neutral. There aren’t any stats for monsters, and there isn’t any firm level of treasure. For an example on how to adapt this: The roach swarms that appear could be normal roaches (appropriate for low-level PCs), poisonous roaches, or even mechanical constructs that inject poison into their victims (appropriate for high-level PCs).

The entryway slopes downward toward a large, iron door. The ground of the sloped area is an iron grating covered with gravel over a foot deep. Unless PCs are very careful, gravel will fall into the grating below, annoying the roaches that live there.

The door is locked. (moderate difficulty) If the PCs linger in the area for any longer than necessary, the roach swarm (if disturbed) will attack.

The western wall of this hallway is covered in gears and levers that appear to be part of some near-indecipherable machine. Inspection may reveal that the device is connected to the doors to areas 3 and 7. If the device is not activated (very difficult) and the door to either area 3 or 7 is opened, the bars in Area 7 are raised, releasing the Roach Golem. If the door to area 3 is opened without activating the machine, the door between areas 2 and 7 will swing open, and the Roach Golem will move toward area 3.

The door to area 18 is sealed, with no lock.
The other doors are closed, but not locked.

Activating the machine or causing noise at the door to area 18 will alert to Vermin King to the PCs presence (see area 15).

This room is filled with tables covered in mechanical junk. If the PCs search the junk thoroughly, they may find several items of value.

This hallway is filled with mounds of fungus, bloated roaches, and a horrible stench. If the Roach Golem kills anything other than a small-sized humanoid, it will attempt to place the corpse in this hallway. The spores in the air in this hallway are hallucinogenic. There is no lock on the door to room 5.

The south wall of this room has been covered by scrawled writing in the language of goblins. It is surprisingly erudite, making historical allusions. It is, however, grammatically awful and raving in tone. It describes being trapped in this room for weeks. It describes the room as a square with one exit: a single, locked door.

This room is free for you to adapt as you wish. Put something in here that will tie things into your campaign… or just put an orc with a pie in here…

Behind the bars in room 7 lies the Roach Golem. A mechanical monstrosity the size of a tiger, the roach golem will attempt to kill anything living that is larger than a roach. (It will ignore the undead.) If it was released (see area 2) but did not move to attack the PCs in area 3, it will be roaming area 7 randomly. If not released, it will remain still unless damaged upon which it will begin to destroy the bars that hold it (which will not take very long). If the golem was not released via area 2, there will be two Chittering Stalkers (see area 10) here.

The wall between areas 7 and 16 is perforated with several small holes. These holes are not straight, and cannot be seen through. Someone listening at this wall, however, may hear skittering noises beyond.

This room contains a non-working version of the roach golem, as well as a variety of tools and spare parts. Three small constructs of insectoid design (each of which bears some resemblance to the Roach Golem) are in this room. They are designed to assist with mechanical tasks (and outfitted with appropriate tools) and will attack anyone who causes damage or attempts to steal something here.

This room is full of dried husks that were once corpses. Most of them were large animals native to the surrounding area, but a few humanoids can be found. Eating some of the fresher corpses are undead abominations – Chittering Stalkers. These are ghouls which appear to have once been goblins. They have mandibles and extra limbs which have been grafted to them. Some of these are mechanical while others are the reanimated limbs of giant insects.

Some items of value can be found among the corpses. Some of the humanoid corpses may have been adventurers…

This room is the dwelling place of the Chittering Stalkers, and there are nearly twice as many here as there were in area 9. On close inspection, some of these may have once been small humanoids other than goblins.. The Stalkers have built cocoon-like nests and tunnels along the walls, and they can travel through them without being seen. There is a secret passage, accessible only from one of these tunnels, between areas 10 and 12. If the battle goes badly for the Stalkers, they will retreat to room 12.

Both doors to this room are locked. The south wall of this room is lined with taxidermied heads of predators – dire wolves, bears, and even some arcane beasts. Their eyes have been replaced by gemstones. The heads are all animated undead, but they remain still until either touched or until one of the PCs approaches the southeast corner of the room. In either of these cases, they animate and attack, making as much noise as possible. The plaques upon which they are mounted have mechanical legs attached which allow the heads to move along the floor and walls.

The arsenal is guarded by two skeletal bugbears wearing war carapaces fitted with an extra pair of mechanical limbs. They are armed with halberds.

Inside this room is a giant spitting cockroach. The beast is capable of spitting acid at a range of 15′. Its carapace is coated in rune-covered, beaten silver that has been woven with protective enchantments.

The Southwest wall of this room is covered by a bookcase. The other walls are covered in scrawled notes and diagrams. The notes are primarily in Goblin, and a careful inspection will recognize the handwriting as similar to that in area 5. The notes and diagrams are primarily concerned with entomology, necromancy, and mechanics. Most of the machinery in the Lair is detailed. The books are a mix of these topics as well, and are in a variety of languages. Some minor spellbooks and scrolls may be found here.

15. Parlor of The Vermin King

The double doors open into a room of surprisingly opulent furnishings. A large painting on the northeast wall, depicting a regal-looking hobgoblin warrior in formal battle dress (who might be recognizable as a historical figure of moderate importance), swings open to reveal a secret door into area 18. There are small openings in the wall between here and room 16. There is also a switch on the wall just south of the doors to this room that activates the doors in area 13.

The Vermin King is an undead hobgoblin arcanist who has an affinity for vermin. He can communicate with them and command them at will. He carries an exotic throwing blade that turns into a vermin swarm upon striking (or missing, for that matter). The swarm can attack his enemies or return to him as he wishes.

Without excavation, this area is not accessible to anything larger than a rat. It contains several swarms of roaches that the Vermin King can command. It also contains a significant amount of coinage.

This room is kept very cold via an enchanted stone in the room’s center. It contains a few corpses of small-sized humanoids. Most of them appear to have been killed by large slashes (the roach golem?). The Cold Stone is a three foot high stone pillar that radiates a zone of near-freezing temperatures. The humanoids have not been stripped of their belongings. If the Roach Golem is freed (via area 2) there will be two Chittering Stalkers (see area 10) in this room.

This room contains a large table in the center of the southern part of the room. The walls in the southern half of the room are lined with racks holding corpses. These racks are mechanized – each of them can extend out into the room to place the corpse it holds onto the table. The control mechanism is located in the eastern corner of the room (the door to area 2 can also be opened from here). If The Vermin King flees into this room, he can activate this mechanism so that all the racks begin quickly extending and retracting, rendering the room dangerous and slowing pursuit. Some of the corpses (all small humanoids) are animated as mindless undead. They may have extra limbs (mechanical or insectoid) grafted onto them with varying degrees of effectiveness. The walls of northern part of the room are lined with tools that range from torture implements to surgical tools to mechanical equipment.