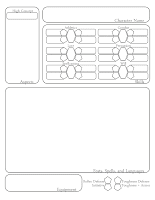 Here’s a sample starting character for Destined and my first draft at a very simple character sheet. Drilla is a bit of a hard character to pigeonhole. She has a bit of magic, but with her low Spellcasting (and noting ameliorating that), she isn’t going to be very reliable in using it. She’s competent (but not outstanding) in combat. She has a solid base to build on in a variety of directions (though it would be rough trying to make her a socially-competent character). I included the text of her feats and spells for those who might be curious.
Drilla the Rat
High Concept: Rat Shaman
Other Aspects: Uncertain Ancestry ● The rats, my children ● Take care of the street, and it will take care of you ● Stench of the sewers ● Relentless
Skills:
Athletics: 6 ● Combat: 4 ● Persuasion: 1 (First Impressions: -2) ●
Lore: 3 (Streetwise: 4) ● Will: 6 ● Spellcasting: 1
Reflex Defense: 6 ● Toughness Defense: 5 (+2 armor) ● Initiative: 6
Languages: Low Tongue, Gutterspeak, Gobble
Feats:
Display of Prowess (Will)
Choose a skill other than persuasion. When you are attempting to intimidate someone, you may display your prowess with this skill. When you make an intimidation attempt, you may choose to roll this skill. The degrees of success or failure modify your persuasion dice roll.
Danger Sense
In the first round of combat, you gain access to your reflex defense immediately, instead of at the beginning of your turn.
Rat Swarm (Creature Companion)
You have an animal or other creature that is a faithful companion. You share an unusual
rapport with your companion, who could be a pet, mount, or familiar. Your companion is
an NPC that is run by the GM and created by the GM in consultation with you. Your
companion will have an aspect reflecting its loyalty to you, and you may use your fate
points to compel this aspect. Doing so, however, does not give your companion the fate
point.
Spells:
Illuminate – Level 1 (-0) (Basic Spell)
Effect: A glowing light as bright as a torch appears. You control its movements: each light may float anywhere within arms reach or remain stationary.
Duration: 5 minutes (extendable)
Degrees of Success: Increase the number of lights by one (+1). Move the light(s) anywhere within your zone (+1).
Aspects: Light
System: If you need to roll to control the created light – if, for instance, using it in a maneuver – the ability rolled is Will.
Notes: You may use this spell as an attack to impose the consequence Dazzled at a cost of three successes.
Whispers – Level 1 (-0) (Basic Spell)
Effect: You can link yourself to a single target you can see. You hear your target’s words as whispers. In addition, you may make your own whispers heard to any target you can see.
Duration: 10 minutes (extendable) or continuous Concentration
Degrees of Success: Link to an additional target (+1 each). Subvocalize your whisper without actually making any noise except at the location of the target (+2).
Target: A creature within line of sight.
System: If you link to a target, the target may banish that link with a simple success on a Will roll.
Rat Form – Level 1 (-2)
Effect: You turn into a giant rat, about 30 lbs in weight. While in rat form, you cannot speak or cast other spells, but you gain some of the rat’s physical attributes. When you attack with your bite, you do not count as unarmed.
Duration: five minutes (extendable)
Degrees of Success: You may spend degrees of success on a one-for-one basis to increase your Athletics rating and the damage bonus of your bite.
Aspects: Rat
Target: Self
Rituals:
Animal Servitor
Requirements: Small animal ● Modifiers: -1 Casting ● Time: 30 minutes ● Duration: Eight hours (extendable) ● Type: Nature ● Effect: This ritual binds a small animal (such as a rat or a small bird) to you for use as a messenger or spy. While the binding is in effect, the animal can be used as a conduit for a Whispers spell (assuming the caster can cast one). It will go to a location that the caster designates, provided that it is well-known to the caster. The caster will know when it has arrived, and can then use it both to speak (with the caster’s voice) and hear. The animal can carry a small object (like a homing pigeon). The caster can have the animal seek out a specific target when it reaches its destination. The target must be no more than two zones away from the destination and must either have been present at the time of casting or have been indicated at that time (the latter costs 2 successes).
Equipment:
knife (+2)
light armor (+2/0): piecemeal scraps of leather, fur, and canvas
crowbar
waterskin